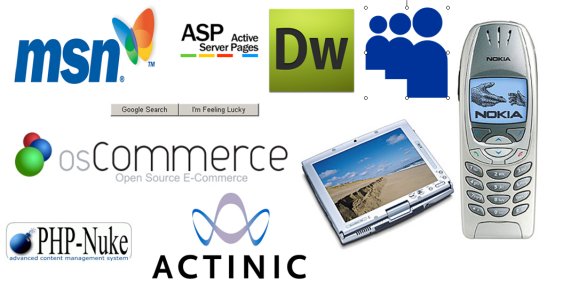 Back in 2004 things were different to how they are now, so let’s take a look at how:

First Generation Websites
We still build new websites for clients who’ve never owned or used a website, these days they tend to be start-ups, new to business, however between 2004-2008 most of our clients were established businesses that had never had a website before, and quite often only felt they needed one because “everyone seems to have one these days”.

The advent of the economic down-turn in 2008-2011 brought a change in direction with many of the people wanting a new website or changes to their website purely to diversify or survive a drop in business.

Up until the recession, Business Link grants were available subsidising new website developments and business growth, and we frequently built start-up websites and online shops for budding entrepreneurs in a time of heightened expectations for trading on the website and economic optimism.

CMS or no CMS
These days, most people are familiar with the term and indeed concept of a CMS, namely a Content Management System. A CMS allows you to take control of your website as well as add and change content and images without reliance upon a skilled web designer.

Ten years ago we carved out a niche building Content Managed websites, as they were a rare thing back then. Most websites we built and indeed saw being built were static websites using simple static pages. Websites then were often built using Dream Weaver and in many cases most design agencies we worked with had little idea or care for what was being written behind the scenes, it looked great, the client was happy and that’s all that seemed to matter back then.

DIY Software
There weren’t any decent Content Management or e-commerce tools back in 2004. There was osCommerce and various other off the shelf systems, however support was poor and more often than not, design choices were limited. If you were will to pay, you could use Macromedia Contribute which was a Windows based authoring tool or Actinic if you were looking at taking online trading seriously.

We were like many other agencies and not happy with what was available, so we built our own Tools for the job.

There was no WordPress back then, or not until 2007, Magento was unheard of as was MailChimp, iContact and all the other tools that are practically house-hold names now.

Google
Back in the day Google was a search engine reliant upon Meta Tags, which are still in use to some extent today. Keyword Meta Tags are a series of hidden key words that are imbedded in to your page that the Search Engines use to determine your relevance and ranking. Many people even today still believe these are used, however the truth is, Google depreciated their use back in 2005 and the other Search Engines followed suit quickly.

This had a massive impact on Search Engine listings meaning that for the first time, a Website owner had to use relevant content and could only influence how Google sees your site, rather than have full control over your ranking.

Microsoft Ruled the World
They did then, but don’t now. 10 years ago, Microsoft’s scripting technology for web pages called Active Server Pages (ASP) was the norm for developers even though first conceived in 1996. ASP was simple, Windows hosting was in good supply. If you wanted to add database functionality to your website, ASP was quick and simple, and therefore popular.

PHP was starting to develop a good reputation at the time, it was light-weight and unlike ASP it was built for the web with its seamless integration with MySql databases, native file upload support and simple commands for comparatively more complex tasks in ASP.
That said, ASP was easier to learn and quicker for a novice to pick-up.

Microsoft then pushed the demise of ASP in 2003 with the next evolution of ASP called ASP.NET. ASP.NET was much more powerful and initially was aimed at migrating Windows Developers and hard core programmers to Web Application Programming using a rich set of class libraries and tools. The problem was that most ASP users weren’t hard core programmers, they were often creative designers that needed simplicity, so the steep learning curve towards ASP.NET pushed most designers and agencies alike towards the comparatively easier PHP technology offering.

Today Windows web hosting is rare by comparison to Linux hosting, and 81.6% of scripting based websites are now built using PHP.

Facebook? What’s that then?
It’s part of every day life now, you see Facebook pages on adverts, Twitter Hashtags on television, every business owner seems to be on LinkedIn, and everyone from the grandparents to the kids have watched material on Youtube.

It never used to be this way of course.

10 years ago, LinkedIn was only used by a few in the know, eBay was about as cutting edge as it got, and for those that liked a dabble with the internet in the evening, they might have had a MySpace page.

Mobile?
In 2004 you’d have probably run your business from a Nokia 6310 which although having a back-lit screen was far from in colour and if you were lucky enough to manage to get on the web, you’d be using WAP technology and simple web pages which a handful of commands that took several minutes to download via GPRS.

If you were leading edge you’d be using a Blackberry with the scrolling wheel on the side, and Text Messages would often cost 10p each.

Tablets were on the wall though as were PDAs. Many people know a PDA as a Public Display of Affection, though us techies remember a Personal Digital Assistant.

Palm PDAs and the Compaq iPaq was cutting edge, and would be seen in the hands of many a commuter heading in to London, and before you say “Apple led the way with the Tablet market”, just remember Bill Gates standing there in 2002 with the Pen and menu driven Microsoft Tablet PC using a mobile version of then Windows XP!